How The Miracle Ride For Riley Kids Is Saving Lives 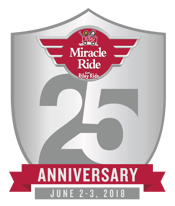 Of every special event held annually in the Indianapolis area, few can match the passion, heart, and adrenaline-pumping roar behind the Miracle Ride For Riley Hospital. This year, the Miracle Ride Foundation is taking another victory lap around the Indianapolis Motor Speedway and, with it, celebrating more than $6.2 Million raised to benefit Riley Kids over the past 25 years.

If you’re not yet familiar with the Miracle Ride, it’s a truly exhilarating spectacle for all who observe and participate- but the true purpose of their mission can often be missed beneath the boisterous herd of rumbling motorists. The goal is quite simple: generate financial support for Riley Hospital For Children, and assist in funding treatment efforts for children in dire need of medical care.

In essence, the event- which happens to be one of the largest and longest running motorcycle charity events in the nation- is a gathering of motorcycle enthusiasts, passionate about the cause and proud to roll on their throttle for children in need. While the concept itself may sound simple, the event and all that it entails is a monstrous undertaking, but one that is undoubtedly worth the blood, sweat and tears poured into it. That’s because, for many of the more than 250 volunteers who work behind-the-scenes year-round to coordinate this (literally) life-changing event, there’s a genuine, personal connection to the cause, which fuels their drive to pull off- what they would consider to be- yet another miracle for the children of Indiana.

For any family with a child who has received treatment at Riley Hospital, it’s a comfort to learn that there’s a large community of supporters who back the quality care that our children receive. I consider my own family to be one of many who have been blessed by the loving touch of Riley Hospital For Children- but until recently, I was clueless to the reality that a group of motorcycle enthusiasts, who literally rally by the thousands, were funding the treatment efforts for my own medically complex child.

I recently began working for Indianapolis Southside Harley-Davidson, and learned soon after that this particular H-D family has strong ties to the Miracle Ride Foundation and their history. For me, this was just one more reason- among many others- that I knew I was working at the right Harley dealership!

In 2014, my wife and I adopted our 7 year-old son, Elijah, from one of the most notoriously abusive and neglectful orphanages in the world, located in Northern Bulgaria. We knew going into the adoption that he would have medical challenges; we were aware that he had Cerebral Palsy, but that was the extent of the knowledge we had, based on his brief medical records. 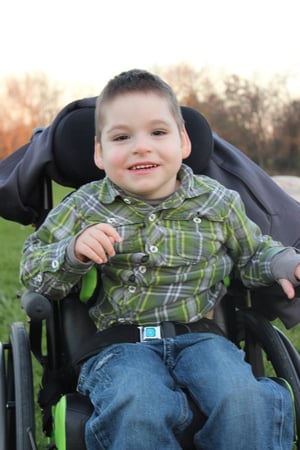 Over time, Elijah was diagnosed with several additional life-altering conditions, including failure to thrive, epilepsy, reactive attachment disorder- just to name a few. At the time, we lived just outside of Madison, Wisconsin, and were scrambling frantically to keep up with his daily medical appointments, with various specialists scattered all over the county.

In 2017, we made the decision to relocate our family to Indianapolis, where Riley Hospital For Children quickly became our one-stop shop for all of our son’s medical needs. Much like my family realized after our move to Indianapolis, The Miracle Ride Foundation recognizes that- for Riley Hospital specifically- raising funds to treat terminally ill and critically injured children is an especially meaningful cause for a number of reasons.

Riley Hospital isn’t just a statistic amongst the more than 150 Indiana hospitals to choose from- they’re (quite literally) the beating heart of hope and healing for nearly 300,000 families each year, with one of the top five newborn intensive care units in the nation, doctors in the top one percent of their unique specialties nationwide, and Indiana’s only Pediatric Research facility. So it’s no wonder why the Miracle Ride Foundation is so revved up to support Riley Hospital in their efforts.

The ride this year begins at Allison Transmissions, where the event kicks off with an enthusiastic ceremony and a performance by the Indianapolis Metropolitan Police Motorcycle Drill Team, as well as other local entertainers. Once the several-thousand motorcycles depart the starting point, they cruise down past Riley Hospital For Children, where the streets are lined with the Riley Kids and families to cheer on the riders and thank them for their support. Next, the hoard of motorists take a lap around the Indianapolis Motor Speedway, before ending their ride next-door to the 8 Seconds Saloon. 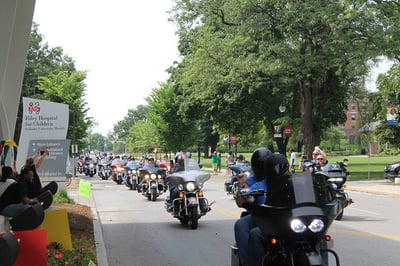 Since 1994, The Miracle Ride Foundation has been organizing various events to raise money for Riley Hospital, and has continually evolved into what they’ve become today: a thunderously passionate parade of motorcycles, refueling hope in the weary spirits of the children who line the streets outside Riley Hospital on ride day; the very children whose lives and families have been touched directly by the hearts of each rider passing by. To simply spectate the roaring parade is nothing short of breathtaking, but the opportunity to participate is truly miraculous.