The Harley Old-Timer from Texas!

My mind wandered back to 2003, embracing memories of a dedicated biker from Texas: the Lone Star State. 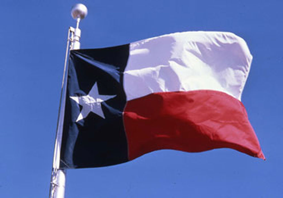 I was with a group of about eight Harleys that went to the 100th Anniversary Wing Ding in Milwaukee, Wisconsin (2003). While motoring back to Central Indiana, we stopped near Rockford, Illinois for some gas. It had been sprinkling on and off, but the rain had let up when we stopped.

On the other side of my gas pump was a fairly new Harley-Davidson Electraglide Ultra Classic, truly the flagship of the motor company. I noticed it had a Texas license plate. The owner/rider had gone into the gas station. I filled my machine with gas, and as I was putting back the pump nozzle, I noticed a stranger walking toward me. He was a short man of slight build, walking very slowly in a pretty upright posture, and without a limp. He walked straight to the Ultra Classic with the Texas plate. 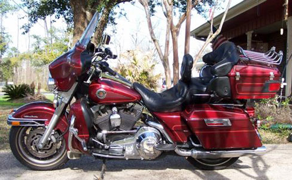 My first thought was, “MY GOODNESS THIS OLD-TIMER RODE ALL THE WAY FROM TEXAS TO MILWAUKEE!” YIKES!

I couldn't help but approach this sojourning, biker enthusiast from Texas. In a nutshell he told me that most of the folks he had ridden with had gone on to that great "poker ride in the sky." However, he was not going to miss the 100th anniversary gala, so he just came on his own. This he lamented with a smile and a little twinkle in his eye.

After I noticed his age and how slowly he walked from the gas station back to his machine, I could not help but be concerned about his welfare. Hence, I inquired, "Sir, are you going to be OK on your trip back to Texas?"

He smiled and replied with much confidence and a Texas drawl, "Oh sure, I'll do just fine ... I've been riding Harleys for 70 years."

I dare say that this determined man had to be in his late 80s or early 90s and was all of 5'6" if that, and 130 lbs. or less. I bade him farewell as he rode off the lot with steady precision. Then I prayed that the Good Lord would keep His hand of safety on the old-timer as he motored home to Texas.

After I got home I did the math, and if this old Texan had been riding 70 years and started out on a new Harley, it may have looked something like this 1933? 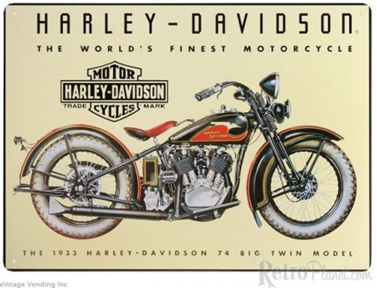 Golly, I wonder if that old-timer rode up to Milwaukee for the 105th Harley-Davidson Anniversary in 2008? I hope I am blessed with good health and can enjoy riding my Harley for many more years.