One of many Harley Davidson moments

You've probably had a few Harley Davidson moments.
You know the ones; they stay with you forever.
Here's one of mine. 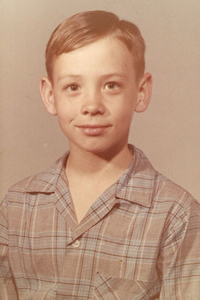 Growing up in the inner city of eastside Indianapolis, my folks would daily dispatch me to run errands for them. In 1961 when I was nine, Dad sent me to the drug store very late one afternoon. Near dusk as I was cutting through an adjacent neighborhood heading to the drug store, I notice a small crowd had gathered at the intersection of N. Dorman St. and E. Vermont St. (very near the former Pepsi-Cola Bottling Plant). Bear in mind this was not a large intersection. It was located in a working class neighborhood of small homes. 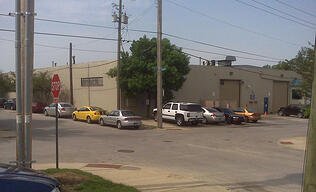 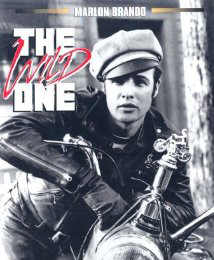 motorcycle riding cap of that era, was riding solo on a beautiful blue FLH. From his motorcycle a personal trick riding show was being put on for the neighbors. His Harley would have had a Panhead engine for sure, perhaps a Duo-Glide model, since this was before the Electra-glide (1965) came out. This cycle was loaded to the max with chrome. It also had one of those big spring mounted white leather "Buddy" seats adorned with white fringe. In addition, the cycle was fitted with highly embellished black leather saddlebags of which the lids had white fringe as well. The rear of this machine was nicely loaded up with bullet lights...awesome bullet lights. 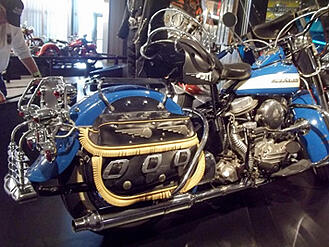 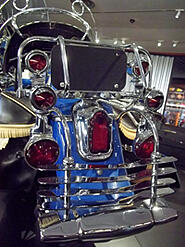 These two images taken at the Harley Davidson Museum in Milwaukee remind me of the motorcycle I saw that night.

Neighborhood folks on the sidewalk were mesmerized with the tricks and stunts this rider was doing on his cycle. He would zip back and forth standing on the seat. However, what really caught my attention was... now picture this... while the cycle was moving, this gent would dismount from his seat and place his left foot on the RIGHT footboard. Then he would be riding in a squatting position hanging onto the right side of the cycle like a sidecar with his head about the same height as his arms. At that point he would extend his right leg straight out in the direction of the front wheel. He would balance the cycle while moving and meander around the intersection with graceful agility and confidence, to a perfect level of poise. Honestly, it was a show!

After this exhibition, he would jump back onto the seat while the cycle was still moving. Then he dismounted again putting his right foot on the LEFT footboard and repeating the same maneuvers. Have any of you ever seen this type of stunt/trick riding done on a big, full-size HOG? Some people must surely possess a God-given uncanny sense of balance.

For the life of me I can't fathom someone being able to perform such stupendous feats of balance on a large moving motorcycle. I saw this with my own eyes and remember it just like it was yesterday. That display of masterful, motorcycle riding magic has never dimmed from my memory.

A few days later I went back to that intersection and inquired of the neighbors if that gent lived in the area. I was anxious to see this trick riding show again. However, I was told that the “trick rider” lived on the west side of town. I would return several more times in the future, but never saw him perform his trick riding skills again, to my deepest disappointment.

This experience was another one of those Harley Davidson moments I will never forgot. 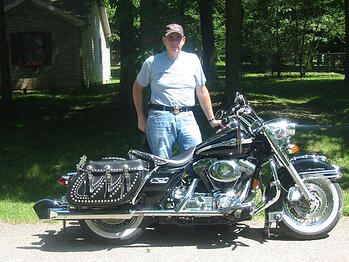 For me it was experiences like this that served as a catalyst allowing me to dream of someday owning my own Harley-Davidson Motorcycle. My dream came true, when I picked up my first brand new motorcycle at Indianapolis Southside Harley-Davidson Sales & Service (1997). What a blessing it has been. 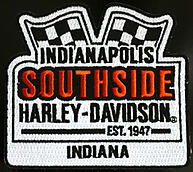